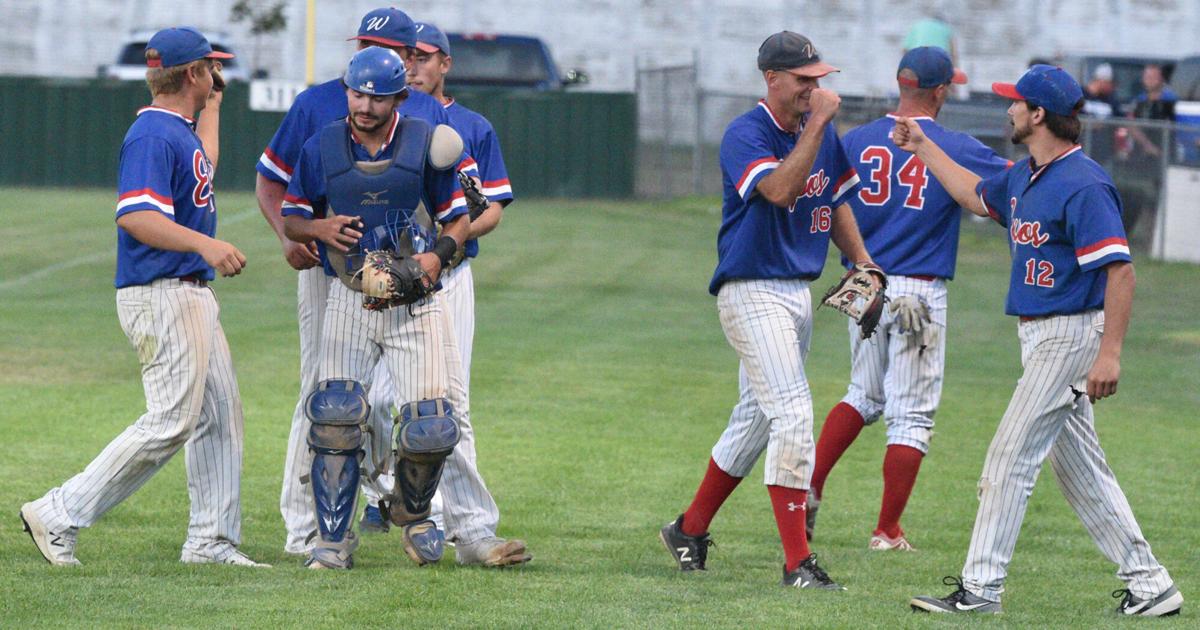 Here is a look at the area teams competing in state tournaments. The Class B teams are listed in order of District 6B finish.

The Yankton Tappers spent the year trying to blend two teams from a season ago — the Tappers and the Lakers. Mark Ryken, who managed the Lakers last year and helmed the combined team that flew the Tappers’ banner this year, feels things came together nicely.

“It worked rather well,” he said. “We had a couple of guys retire, which hurt, but otherwise it was a nice fit.”

Thygeson, the veteran who helped the Vermillion Red Sox win a state title in 2006 as a pickup player, then was a key member of Crofton’s run of three straight championship game appearances in the early 2010s, has seen a resurgence after briefly retiring from amateur baseball.

Also hitting well for the Tappers, according to Ryken, are William Rauch, Colin Muth, and Mitch and Devin Gullikson.

The Tappers play the 5:30 p.m. game Friday in Aberdeen, facing the Brookings Cubs.

“They’ve lost seven games, but every one of them is to one of the top teams in the state,” Ryken said of the Cubs. “We’re going to throw Rofe to start, hope he gives us a good game and we can get some hits behind him.”

The Tappers will also utilize a future Lancer and former Buck, Joe Gokie, to shore up their defense. Gokie, the starting shortstop for Yankton’s Legion team, batted .444 with 25 RBI and 49 stolen bases for the 23-17 Post 12 squad this summer.

“Defense is one of those things that hasn’t been the best for us,” Ryken said. “We’re going to put Gokie at shortstop. He’s been playing well all season.”

Yankton will play either the Black Hills A’s or Renner on Saturday, as Class A plays a modified double-elimination format. Unless the Tappers go 0-2 they will advance to the final weekend, Aug. 12-14 in Mitchell.

July was a good month for the Wynot Expos (11-10-1). Player-manager Lee Heimes is hoping the Expos can keep that run going in August.

Wynot went 7-1 in July, with the only loss coming against Class A Vermillion. In the three District 6B wins, the Expos allowed just eight runs.

“Our pitchers really did well, maybe had one or two walks in the tournament. They were attacking the zone,” Lee Heimes said. “We were getting timely hits from the young guys and the veteran guys. Our defense was good, too.”

The Expos picked up three players for the state tournament: James Kaiser and Seth Wiebelhaus of Crofton, and Alex Wagner of Lesterville.

The Expos open against the Lennox Only One Alpacas in the 1 p.m. game on Friday.

“They have a pretty good pitching staff and some good young players,” Lee Heimes said. “It will be a challenge for us, but hopefully we’ll rise to the challenge.”

The Freeman Black Sox just missed a .500 regular season (8-10) thanks to a good mix of new and old, according to player-manager Jake Weier.

“We picked up a few new guys, and everyone is all in,” he said. “We got Owen Feser to catch and hit, Blake Schroedermier to throw and hit, and that allowed us to move forward and get some of the wins that were out of reach the last couple years.”

“We’re fortunate to have some good guys,” Weier said of the pitching staff.

“Everyone’s been hitting well for us, with the exception of the Wynot game (in the district championship,” Weier said. “Any one of our guys can go off. We’re very strong all the way through.”

“We wanted to get a pitcher, and he’s a nice fit,” Weier said. “He can hit if we need him to, and play pretty much anywhere.”

“We like our chances,” Weier said. “We need to keep playing our game, have our pitchers throw strikes and get outs, and our hitters need to get hits when we need them.”

As the Tabor Bluebirds (8-6) head to state, they do so with the optimism that they will be there for an extended stay, according to manager Chris Sutera.

“We feel like our season has gone well,” he said. “There are a few things you could always do better. Hopefully we’ll take care of business and defeat Canova in the first game.”

“Bryce has been our top pitcher all year. He ate up quite a few innings,” Sutera said. “Hunter Hallock and Chase Kortan have also pitched well for us.”

A number of players have contributed offensively for the Bluebirds, Sutera noted.

The Bluebirds will also be bolstered by pickup player Tyler Edler, a veteran from Lesterville.

Tabor plays the 11 a.m. game Friday against Canova, a team that has been a state champion or title contender in recent years.

“They have a lot of guys that have been around the block a time or two,” Sutera said. “We have the scrappiness to take care of the job.”

Sutera noted it will take more than a little “scrappiness” to keep the Bluebirds in Mitchell.

“We need to limit mistakes, play free and have fun,” he said. “That’s when we play our best baseball.”

The Menno Mad Frogs’ season could have gone much differently.

Menno, which picked up several members of the defunct Irene squad, lost its starting catcher in the second game of the season. That, and early defensive struggles, sent the Mad Frogs to the bottom of the South Central League pond.

“Our record certainly could have been different,” said Menno player-manager Caleb Preszler. “We had three games we lost by a run during the regular season.”

But the Mad Frogs found themselves, beating SCL champ Lesterville during the regular season, then sending the Broncs packing in the district tournament.

“Things came together at the end,” Preszler said.

The Mad Frogs have leaned on a trio of pitchers during the season.

“Macon (Oplinger) is still pitching well, just good old reliable Macon,” Preszler said. “Doug Hall was questioning if he would play this season, but he had a couple of big wins for us. Jamison Kleinsasser was a big help in relief.”

While the Mad Frogs don’t have any hitters with the “wow” factor, according to Preszler, they have plenty of guys hitting the ball hard.

“Preston Gall is hitting the ball hard, as well as he’s hit the ball in his career,” he said. “Dylan Lehr and Macon Oplinger are as good at the top of our order as they normally are. Spencer Schulz got the go-ahead hit to send us to state.

“We have a lot of guys that are hitting it hard but right at someone,” he added. “We realized that if we keep hitting the ball hard, some of them are going to fall. That did happen for us at the end of districts.”

With the loss of catcher Tate Gale early in the season, the Mad Frogs addressed the need by picking up Crofton catcher Jared Wiebelhaus for the tournament. They also picked up Lesterville infielder Tanner Van Driel, though Van Driel will see limited duty due to injury.

The road for the Mad Frogs starts out with a challenge, as Menno draws 2021 state runner-up Flandreau in Sunday’s 11 a.m. contest.

“They’re a good team. They hit well and field well,” Preszler said of the Cardinals. “When they have everyone there they’re tough to beat.”

For Menno, the formula is simple: play clean.

“Errors are what cost us games at the beginning of the season,” Preszler said. “We’ve been playing a lot better in the back half of the season.”