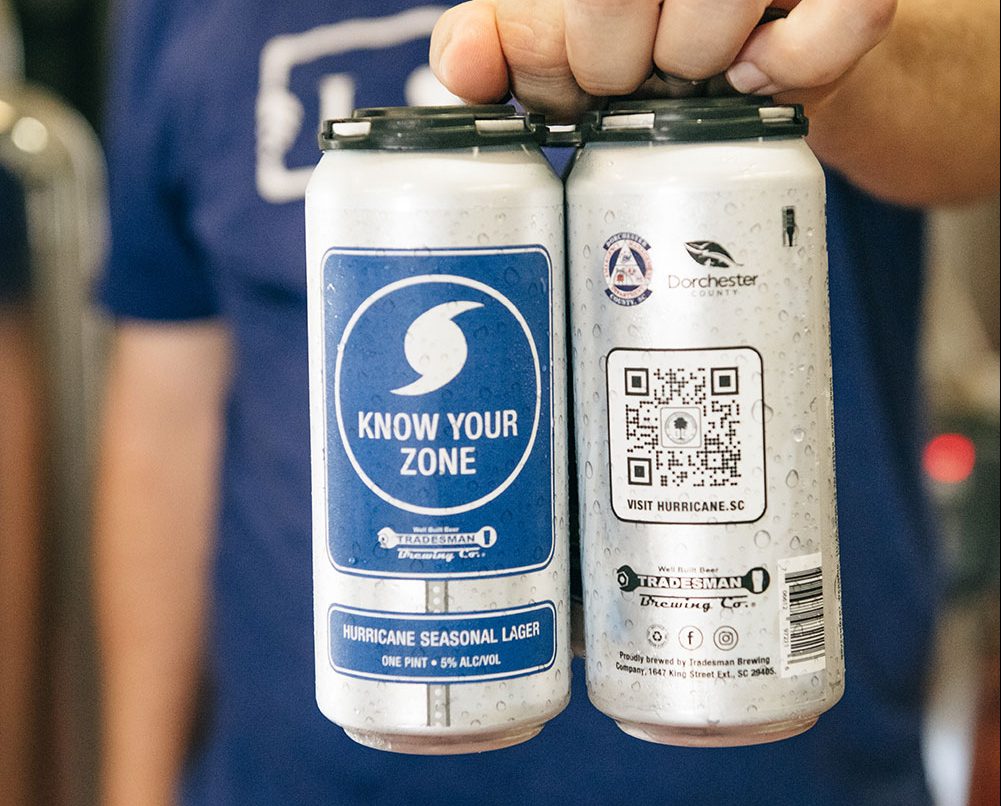 Hurricane season is officially here, and you can find everything you need to know on a beer can, thanks to Tradesman Brewing Co. and Lowe’s Foods.

In partnership with Dorchester County Emergency Management Department (EMD), Tradesman Brewing recently launched its Know Your Zone lager, exclusively available at Lowe’s Foods in Summerville, West Ashley and Mount Pleasant. Plans to expand to other Lowe’s locations across the state are in the works.

Sara Gayle McConnell, owner, bean counter and head minion of Tradesman Brewing was approached April 13 with a simple question from David Amann from the Dorchester County EMD: “Wouldn’t it be cool if we just had a hurricane beer?”

The EMD held its annual hurricane preparedness and public outreach meeting in mid-April to talk about ways to educate others and spread awareness. During a topic of new and unique ways to “send out the same old message each year,” Amann threw out an offhanded idea to the staff, thinking it wasn’t going to amount to much.

“I just randomly thought, ‘As an adult, what would actually get me to potentially look at something?’ And then I was like, ‘What about beer? Would it be legally allowed to partner with a brewery or something?’ And they’re like, ‘Yeah, why not?’”

Amann reached out to a friend who worked at Frothy Beard’s Off-World Summerville location, who put him in touch with the manager. They loved the idea, according to Amann, but were unable to help brew enough beer in time for the Hurricane Expo on June 1 due to tank space.

That was when McConnell was added to the email chain.

“Sara sent me this pretty nice email saying that she was super onboard,” Amann said. “And she wanted to schedule a meeting right away. So she just basically jumped right in the pool with me super quick and that’s when it kind of took off way faster than I expected it to.”

Amann’s initial plan was to create a hurricane beer, sell it for the season (June 1-Nov. 30) and call it a day, according to McConnell. However, after some more thought and discussion, the teams from Tradesman Brewing and the EMD crafted the idea of making the can more than just a beer, but a starting point for education.

The team at the EMD was also along for the ride during the whole process — from brewing to label design to canning. It was a collaborative effort from both teams to put out a beer that not only tastes good, but provides useful information for the hurricane season and beyond.

“Obviously they own the beer, but it truly has been a partnership,” Amann said.

The final product of Know Your Zone features a QR code that leads directly to hurricane.sc, an online hurricane guide to help build a plan, know where to evacuate and how to connect with support during a hurricane.

According to McConnell, because of the exclusivity Tradesman has with Lowe’s, the Know Your Zone can will be featured on an endcap, placed alongside other hurricane essentials. “Scan the code, see what goes in the kit and purchase it right there next to the beer.”

On the backend, McConnell added that the QR codes are also an opportunity for the EMD and Tradesman to learn. The teams can track the number of clicks on the QR code, allowing them to see if the number of scans increase during a named storm, for example.

As for the style of beer, McConnell wanted to work with Amann and his team to make something special for the seasonal brew.

“I think because it’s hurricane season, and in summer, we were looking for a light, easy drinking style of beer,” McConnell said. “And so a lager is typically what people think of, but a lager traditionally takes three weeks to a month and a half.”

Though a traditional summer lager wasn’t quite in the cards for Know Your Zone, McConnell had another idea: “How do we move beer through your tanks faster?” she added. “A California Cooler is the way to do that. It’s a lager that’s brewed at ale temperatures, so it means 10 days to two weeks for fermentation. And we put a little bit of lemon on the backend just to give it a crispness.”

“Sara was the perfect person to get the idea,” Amann said. “She has just been amazing to work with.”

“It’s about education,” McConnell said. “It’s not about the business. It’s about what we’re doing for the community. To keep them safe.”