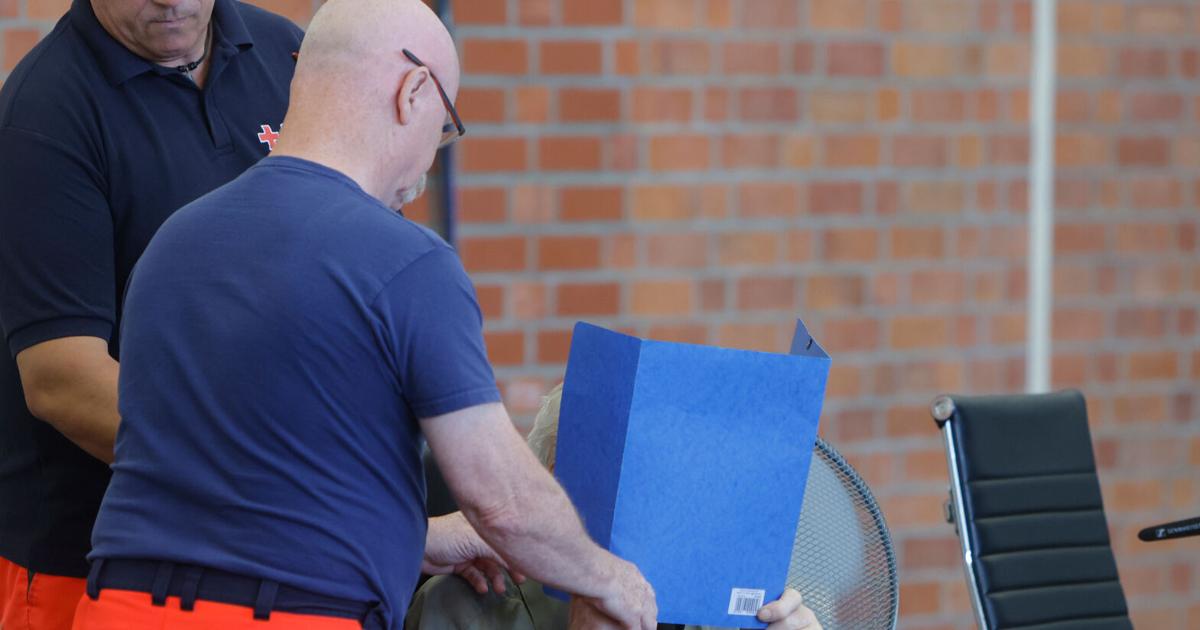 BERLIN (AP) — A 101-year-old man was convicted in Germany of more than 3,500 counts of accessory to murder on Tuesday for serving at the Nazis’ Sachsenhausen concentration camp during World War II.

The Neuruppin Regional Court sentenced him to five years in prison.

The man, who was identified by local media as Josef S., had denied working as an SS guard at the camp and aiding and abetting the murder of thousands of prisoners.

In the trial, which opened in October, the centenarian said that he had worked as a farm laborer near Pasewalk in northeastern Germany during the period in question.

However, the court considered it proven that he worked at the camp on the outskirts of Berlin between 1942 and 1945 as an enlisted member of the Nazi Party’s paramilitary wing, the German news agency dpa reported.

“The court has come to the conclusion that, contrary to what you claim, you worked in the concentration camp as a guard for about three years,” presiding Judge Udo Lechtermann said, according to dpa. He added that, in doing so, the defendant had assisted in the Nazis’ terror and murder mechanism.

“You willingly supported this mass extermination with your activity,” Lechtermann said. “You watched deported people being cruelly tortured and murdered there every day for three years.”

Prosecutors had based their case on documents relating to an SS guard with the man’s name, date and place of birth, as well as other documents.

The five-year prison sentence was in line with the prosecution’s demand.

The defendant’s lawyer had sought an acquittal. Defense attorney Stefan Waterkamp said after the pronouncement of the sentence that he would appeal the verdict, dpa reported.

“Even if the defendant will probably not serve the full prison sentence due to his advanced age, the verdict is to be welcomed,” said Josef Schuster, the head of the Central Council of Jews in Germany.

“The thousands of people who worked in the concentration camps kept the murder machinery running. They were part of the system, so they should take responsibility for it,” Schuster added. “It is bitter that the defendant has denied his activities at that time until the end and has shown no remorse.”

For practical reasons, the trial was held in a gymnasium in Brandenburg/Havel, the 101-year-old’s place of residence. The man was only fit to stand trial to a limited extent and was only able to participate in the trial for about two and a half hours each day. The process was interrupted several times for health reasons and hospital stays.

Efraim Zuroff, the head Nazi hunter at the Simon Wiesenthal Center’s office in Jerusalem, told The Associated Press that the sentence “sends a message that if you commit such crimes, even decades later, you might be brought to justice.”

However, Zuroff expressed concern that S. might serve only part of the sentence or none at all because of his planned appeal and his advanced age.

Sachsenhausen was established in 1936 just north of Berlin as the first new site after Adolf Hitler gave the SS full control of the Nazi concentration camp system. It was intended to be a model facility and training camp for the labyrinthine network that the Nazis built across Germany, Austria and occupied territories.

More than 200,000 people were held there between 1936 and 1945. Tens of thousands of inmates died of starvation, disease, forced labor and other causes, as well as through medical experiments and systematic SS extermination operations including shootings, hangings and gassing.

Exact numbers on those killed vary, with upper estimates of some 100,000, though scholars suggest figures of 40,000 to 50,000 are likely more accurate.

Donald Trump knew his supporters were carrying guns and weapons on Jan. 6 and intended to join them at the Capitol despite grave warnings. That’s according to chilling new testimony about the angry president grabbing at the steering wheel of the presidential SUV and using vulgar language in a desperate attempt to force security aides to let let him join the scene as a mob of rioters was storming the Capitol. Cassidy Hutchinson, who was White House chief of staff Mark Meadows’ top aide, testifield Tuesday to the House committee investigating the Jan. 6 riot.

Forty-six people have been found dead after being abandoned in a tractor-trailer on a remote back road in Texas. It’s the latest tragedy to claim the lives of migrants smuggled across the border from Mexico to the U.S. Sixteen people were hospitalized, including four children. San Antonio Police Chief William McManus said a city worker was alerted to the situation by a cry for help shortly before 6 p.m. Monday. Fire Chief Charles Hood said 12 of those taken to hospitals were adults and four were children. He said they were hot to the touch and dehydrated, and no water was found in the trailer.

Tuesday marks the first elections since the Supreme Court revoked a woman’s constitutional right to an abortion. It’s a top issue in multiple races in primaries in seven states. In Colorado, a rare Republican who supports abortion rights, Joe O’Dea, is competing for his party’s U.S. Senate nomination against State Rep. Ron Hanks, who opposes the procedure. In Illinois, farmer Darren Bailey, who wants to repeal the state’s guaranteed right of abortion, is the leading Republican gubernatorial candidate. Trump’s election lies are also a big issue Tuesday. An indicted Colorado clerk who echoes Trump’s conspiracy theories is running for the GOP nomination for Secretary of State.

Six states are holding congressional primary elections, primary runoffs or special elections on Tuesday. Many of the Republican races will test former President Donald Trump’s national influence. Others could provide the first hints of how voters are reacting to the Supreme Court’s decision on abortion. In Colorado, Republican congresswoman Lauren Boebert is trying to beat back a challenge from a more mainstream Republican. Two Republican House incumbents in Mississippi are facing runoff primaries. In Illinois, Republican congresswoman Mary Miller is seeking a victory after calling the Supreme Court’s abortion decision a “historic victory for white life.” Her campaign says she meant to say a victory for the “right to life.”

Three people were killed and dozens others were injured Monday when an Amtrak passenger train traveling from Los Angeles to Chicago struck a dump truck and derailed in a remote, rural area of Missouri. A Missouri State Highway Patrol spokesman says two of the people who died were on the train and one was in the truck.  It was not immediately clear exactly how many people were hurt, the patrol said, but hospitals reported receiving more than 40 patients from the crash and were expecting more. Officials say Amtrak’s Southwest Chief was carrying about 207 passengers and crew members when the collision happened near Mendon at a rural intersection on a gravel road with no lights or electronic controls. The Highway Patrol said seven cars derailed.

Leaders of the world’s wealthiest democracies have struck a united stance to support Ukraine for “as long as it takes” as Russia’s invasion grinds on. They vowed to hit Russia with immediate and severe economic pain for its invasion. Part of that could be steps to cap Russia’s income from oil sales that are financing the war. The final statement from the Group of Seven sets up more discussion in the weeks ahead to explore measures to bar import of Russian oil above a certain level. Leaders also agreed on a ban on imports of Russian gold and to step up aid to countries hit with food shortages by the blockade on Ukraine grain shipments through the Black Sea.

Ghislaine Maxwell has been sentenced to 20 years in prison for helping the wealthy financier Jeffrey Epstein sexually abuse teenage girls. The sentencing Tuesday was the culmination of a prosecution that detailed how Epstein and Maxwell flaunted their riches and associations with prominent people to groom vulnerable girls and then exploit them. Those crimes occurred even as the couple hobnobbed with some of the world’s most famous and wealthy people, including former U.S. Presidents Bill Clinton and Donald Trump and England’s Prince Andrew. Epstein killed himself in jail while awaiting trial. Maxwell denied being Epstein’s accomplice.

A judge has found that there is enough evidence against a man once briefly married to Britney Spears to go to trial for felony stalking. Authorities say Jason Allen Alexander appeared uninvited at Spears’ June 9 wedding to longtime boyfriend Sam Asghari at her home in Thousand Oaks, California. At a hearing Monday, a judge found there was sufficient evidence against Alexander for the stalking charge and misdemeanor counts of trespassing, vandalism and battery. Alexander’s attorney entered pleas of not guilty to all the counts and says there is no evidence he had any intention of harming Spears.