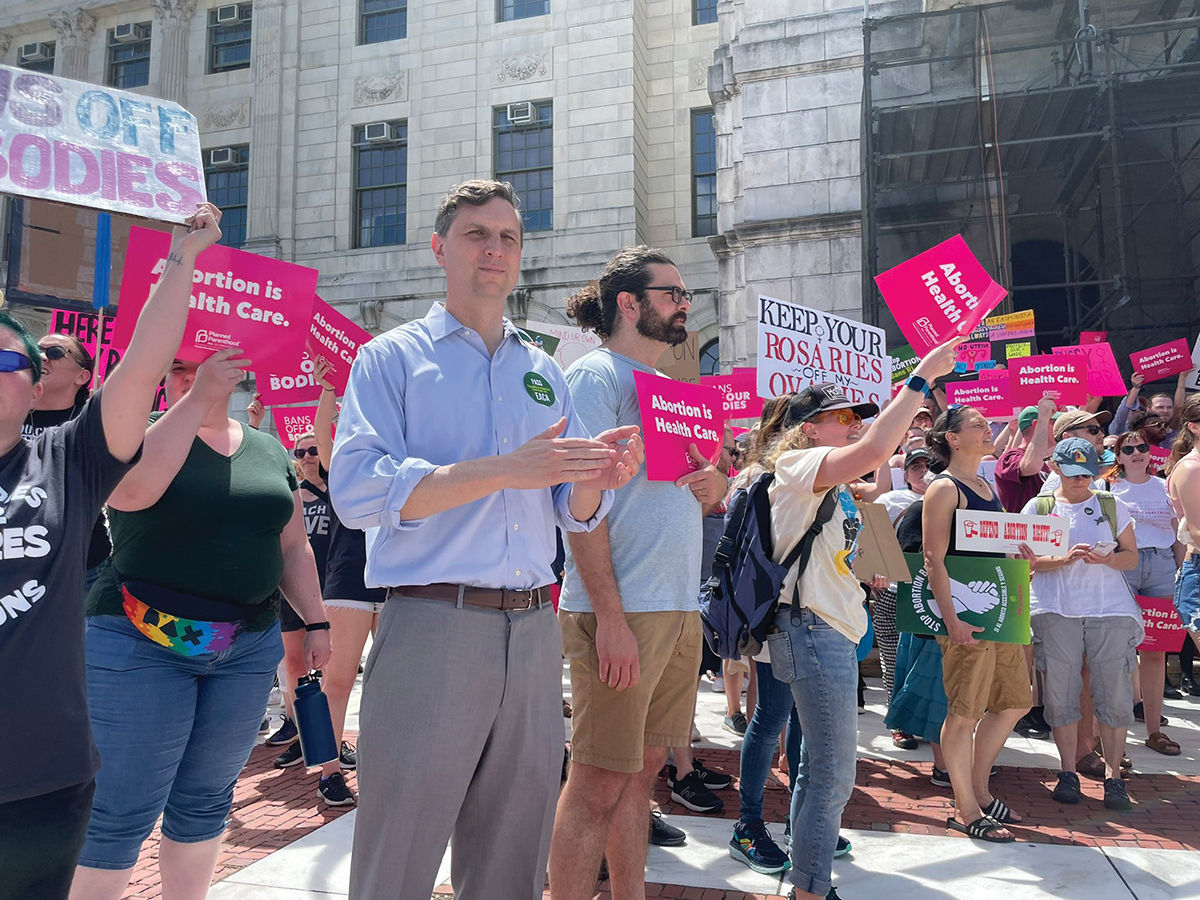 When he arrived at the U.S. Capitol in January 2001 as a newly elected House member, Rep. James R. Langevin, D-R.I., understood that helping Rhode Islanders solve problems was a big part of the job.

After a shooting accident in 1980 ended his hopes of becoming a police officer, he slowly climbed the local political ranks. Langevin served six terms as a Warwick state representative and then six years as secretary of state before shifting his sights to Washington, D.C.

“I knew that when people turned to my office, it was because they needed help breaking through roadblocks and making government work like it should,” said Langevin, whose decision not to seek reelection has a bevy of eager candidates vying to replace him.

What Langevin didn’t know in 2001 as an eager freshman was how he’d end up making his mark in the chamber or if he’d even stay long enough to get the chance.

In November, 2nd Congressional District voters will elect a new representative. The winner will have his or her own ideas about the job, motivations and challenges as the newest face in the state’s tiny, four-member congressional delegation.

Like most congressional candidates, all seven understand that listening to and being an advocate for constituents is important. But they differ on what they see as their strengths and what they hope to prioritize and focus on if elected.

For now, they’re mostly focused on standing out from each other and getting through the Sept. 13 primary.

Bah, who was born in Africa, acknowledges he’s eager to be recognized as the first Black representative to be elected from Rhode Island and as one of a handful of refugees to serve in Congress. He said he wants to be a “symbol” of hope and the American dream.

Lancia, who served in the military, is looking forward to joining a small group of disabled veterans on the House floor.

“Having a woman’s perspective … is especially important,” Morgenthau said.

Segal sees 20 years of experience at the local, state and federal levels of “building coalitions to make government do more for everyday people” as his distinguishing characteristic in the race.

Fung, meanwhile, says his ability to “earn people’s trust” and serve as a “mainstream [voice]” in a partisan chamber will help him stand out in the race and in the chamber if elected.

Fox, a former journalist who later created her own communications firm, thinks she best understands the challenges of owning a small business. And Magaziner sees his best asset as understanding the district and what its needs are, based on his track record as an elected state official.

“You need somebody that works hard, who has the right values and who has a track record that has done something like this before,” he said. “I think it would be a mistake to elect somebody who [faces] a significant learning curve.”

But every House freshman faces on-the-job training, including working on policies that aren’t their specialty, says Wendy Schiller, professor of political science at Brown University. A freshman member of Rhode Island’s tiny delegation will have a difficult time carving out new issues to specialize in because their more-established colleagues already focus on armed services, LGBTQ+ rights and judiciary matters, she says.

Championing health care would help a new member make a mark in the chamber and garner some attention back home, Schiller said.

The Ocean State is one of 12 states with just two or one U.S. House member inside the 435-member chamber. By comparison, neighboring Massachusetts has nine U.S. House members and California has the most with 53. The numbers alone make it hard for new members from small states to get noticed.

He notes that Rep. David N. Cicilline, D-R.I., got his political influence by working his way up the majority party leadership structure. Cicilline, first elected in 2010, currently chairs the House Subcommittee on Antitrust, Commercial and Administrative Law. But he’ll lose that position if a Republican wave moves through the House, Cammarano says.

“If the Democrats lose, [Cicilline’s power] goes on a hiatus until they have a majority again. He’ll still be important but [he] won’t have influence,” Cammarano said.

Longevity in Congress is, of course, critical for all House members.

Good ideas “take a long time” to get enacted, says Langevin, noting it took him close to a decade of his 11 terms to begin carving out a niche as a leading voice on cybersecurity.

“We can either credit or blame the Founding Fathers for how long it takes for legislation to make its way through Congress,” Langevin said. “They deliberately designed the legislative process to be slow moving so … only the best ideas [rise] to the top. Sometimes things can happen quickly, but that’s in times of crisis.”

Cammarano says unique personal characteristics help new members stand out in the crowded House chamber. He feels Langevin being the first quadriplegic elected to Congress helped him stick out in a positive way.

“Another way to do it is if you’re a celebrity or a huckster. If you’re a Kennedy, for example, is big,” Cammarano said. “If you’re a war hero, or if you save 20 children from a burning fire and you end up in Congress, having something unique that makes you different than anybody else. You either have it or you don’t.”

Being an expert or specialist in a certain area can also give a newly elected member an advantage, Cammarano says. He notes that Democratic Sen. Jack Reed has used his military experience to his advantage on Capitol Hill. Reed served in the U.S. Army’s 82nd Airborne Division and also taught at the U.S. Military Academy. He’s now chairman of the Senate’s Armed Services ­­Committee.

The PC professor says freshman members typically must, as Langevin did, find their niche as they go. That’s because the U.S. House is structured to help them learn – and develop – federal policy. “The committee assignment is a natural pipeline to becoming an expert in one area of public policy,” he said. “Members work with professional committee staffers who are experts and learn a lot from them.”

Langevin admits he wasn’t thinking about cybersecurity when he first pursued the seat. But he saw cybersecurity as “an unaddressed need” in the chamber and that there was initially a “real void in leadership” on the issue.

Langevin, along with then-Rep. Michael McCaul, R-Texas, in 2008 co-founded the Congressional Cybersecurity Caucus.

As he dug deeper into the issue, including how cyberattacks can damage computer infrastructure, Langevin knew he could make a difference, he says.

But “it’s rare that you, as a legislator, you come across a topic that is so big and important to the country, and nobody’s addressing it” in Congress, Langevin said.

“[You] need to be there for some period of time” to make an impact locally and nationally, he said. “Serving one term or two terms is probably not enough. You may accomplish something [quickly], but it [usually] takes time and you have to be patient.”

That’s why the first and most important priority for every future congressional leader is to get elected, of course.

This year’s candidates talk about many of the same issues, such as education and the economy, but they have different ideas for how to address them.

He hopes to use his experience in working with refugees and getting them accustomed to American society and to use his voice to make college more affordable. “I want to … be a bridge builder to ensure that there is potential in investing in the future of American children,” Bah said.

Lancia adds that his candidacy “hallmark” will be trying to make Providence’s waterfront a tourist destination with attractions to boost the state’s tourism industry.

Magaziner, Fox, Morgenthau and Segal all have eyes on the economy and addressing inflation. Segal says he’d like to attack price gouging and prevent companies from creating monopolies. He also says he would discourage the Federal Reserve from increasing interest rates too fast.

Fox wants to work to support expanding the federal child tax credit and investing in workforce development initiatives, such as apprenticeship programs.

“It’s one thing to prepare someone for one particular job. But what are we doing once they’re in that job to continue to grow in their career?” Fox said.

Morgenthau would focus on “American competitiveness” in improving the country’s position on supply chains and job training.

Magaziner says he would support suspending the federal gas tax to help lower costs for individuals, while his long-range plans include fighting for the offshore wind industry and creating additional funding for states for climate-resiliency projects.

Langevin recalls health care being a top priority when he was elected, culminating in helping pass the Affordable Care Act in 2010 during former President Barack Obama’s administration. Supporters of the ACA clashed with large health care companies that wanted the status quo and with Republicans, Langevin says.

In his tenure, he also had to juggle international conflicts, including the Sept. 11, 2001, terrorist attacks.

Machtley, a U.S. Navy veteran, says he ran for Congress because of what he saw happen in Vietnam, including returning veterans not being respected for their service. After he was elected, Machtley managed to maintain his focus on assisting the military, including serving on the Armed Services Committee.

But Machtley, who had not served in office before being elected to Congress in 1988, said that whatever the personal motivations of the candidates, there are “a lot of fundamental things” newly elected members must focus on before becoming a standout in the chamber.

That includes whether to live in Rhode Island while working in Washington, addressing legislation on unfamiliar issues and, perhaps most important, getting on desired committees.

“It is a whole new process unlike anything that anyone has ever done if you’re in business or at the [R.I.] Statehouse,” Machtley said. “The process is really about what committee you’re going to get on. That determines, to some extent, how successful you’re going to be.”