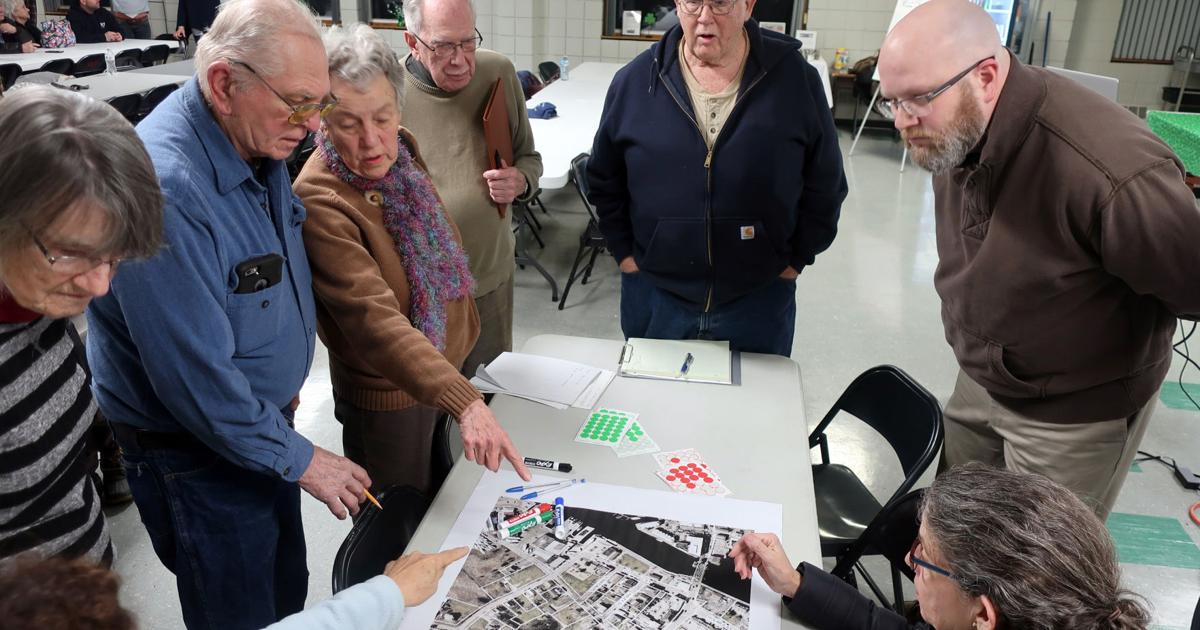 That was the commentary of a participant in a public workshop Thursday exploring the professionals and cons of adjusting the visitors patterns on Cottrell, Washington and Willow streets, which might end in further parking areas.

But broader parking points, corresponding to these related with Seaport Marine’s deliberate redevelopment of its 11.5-acre web site on Washington Street, additionally crowded into the dialog. If accredited, the Seaport Marine undertaking would come with a public-access boardwalk, industrial area, housing, a lodge and a restaurant. The proposal is on the agenda of the Architecture Design Review Board at 7 p.m. Monday at Town Hall.

With the way forward for their neighborhood on their minds, about 50 native property and enterprise house owners shared their ideas, issues and questions Thursday night time on the discussion board held on the B.F. Hoxie Fire Station Meeting Room. The session was led by Jason Vincent, Stonington’s director of planning.

The intersection at Route 1 and Cottrell has been rated an “F,” the bottom score, by visitors engineers, and can also be harmful to pedestrians, Vincent instructed the attendees earlier than they broke into small teams to brainstorm concepts.

“Cars have a hard time getting places in that intersection,” he stated. “And traffic engineers don’t rate pedestrian safety, they just rate how quickly cars can get through the road.”

In her small group, Lisa Konicki, president of the Ocean Chamber of Commerce, stated that making Cottrell Street one-way might present essential enhancements. But she needed to see parking restrictions in order that the areas turned over sufficient to profit companies.

“It’s definitely a net gain on parking and it reduces potential crash opportunities,” she stated. “I think the key thing is not just the net gain in parking but how long do you let them park: Is it a two-hour, a three-hour, or all day, so you don’t have abuse.”

James Short, who lives within the neighborhood, stated creating extra parking alongside Cottrell Street would have a constructive affect, but when Seaport Marine doesn’t present sufficient parking for its prospects, then parking in Mystic will go from dangerous to worse.

“Parking is notoriously tight in Mystic, especially during the summer tourist season,” he stated. “When this development goes in, the main point is to make sure these developers have enough on-site parking for what they’re trying to do because if they don’t do that, it’s going to be a bigger mess.”

Participants requested broad questions, corresponding to: What is the issue we’re attempting to resolve? Who advantages from making these modifications? Are there extra sensible options?

Others made particular observations, corresponding to that drivers’ sightlines exiting from Willow Street onto East Main have been inferior to the sightlines from Cottrell Street.

Genevieve Triplett, co-owner of Mystic Pet Shop, at 18 East Main St. on the nook of Willow Street, stated she makes use of Willow as a loading zone for 18-wheeler vans that frequent her enterprise. If Willow have been made one-way, the vans wouldn’t be capable of maneuver across the Cottrell and Washington Street loop, and he or she must resort to unloading on East Main.

“We will have to unload on Route 1, and if that’s happening at 3 o’clock on July 4th weekend, commerce has to happen — it’s jobs, it’s state taxes, it’s property taxes, commerce is happening,” she stated. “My concern is the acceptance that Route 1 is going to be my loading zone. I don’t think that would be a benefit to traffic flow.”

Tom Norris, who lives within the neighborhood, requested if it was possible to have Groton and Stonington work collectively to resolve parking and visitors points.

“Things we do on this side of the river are going to impact the other side and vice versa, so hopefully we can at least talk to each other,” he stated.

Wrapping up, Vincent stated he would discuss to neighborhood leaders concerning the concepts generated by the workshop and would talk with contributors sooner or later.

“I heard a bunch of ideas I hadn’t thought of myself and that’s why we have programs like this. We only get better by talking about things and challenging each other’s opinion on things,” he stated. “I believe a stronger community is when people are engaged and feel empowered to make decisions in their community, and that’s my commitment to you folks.”