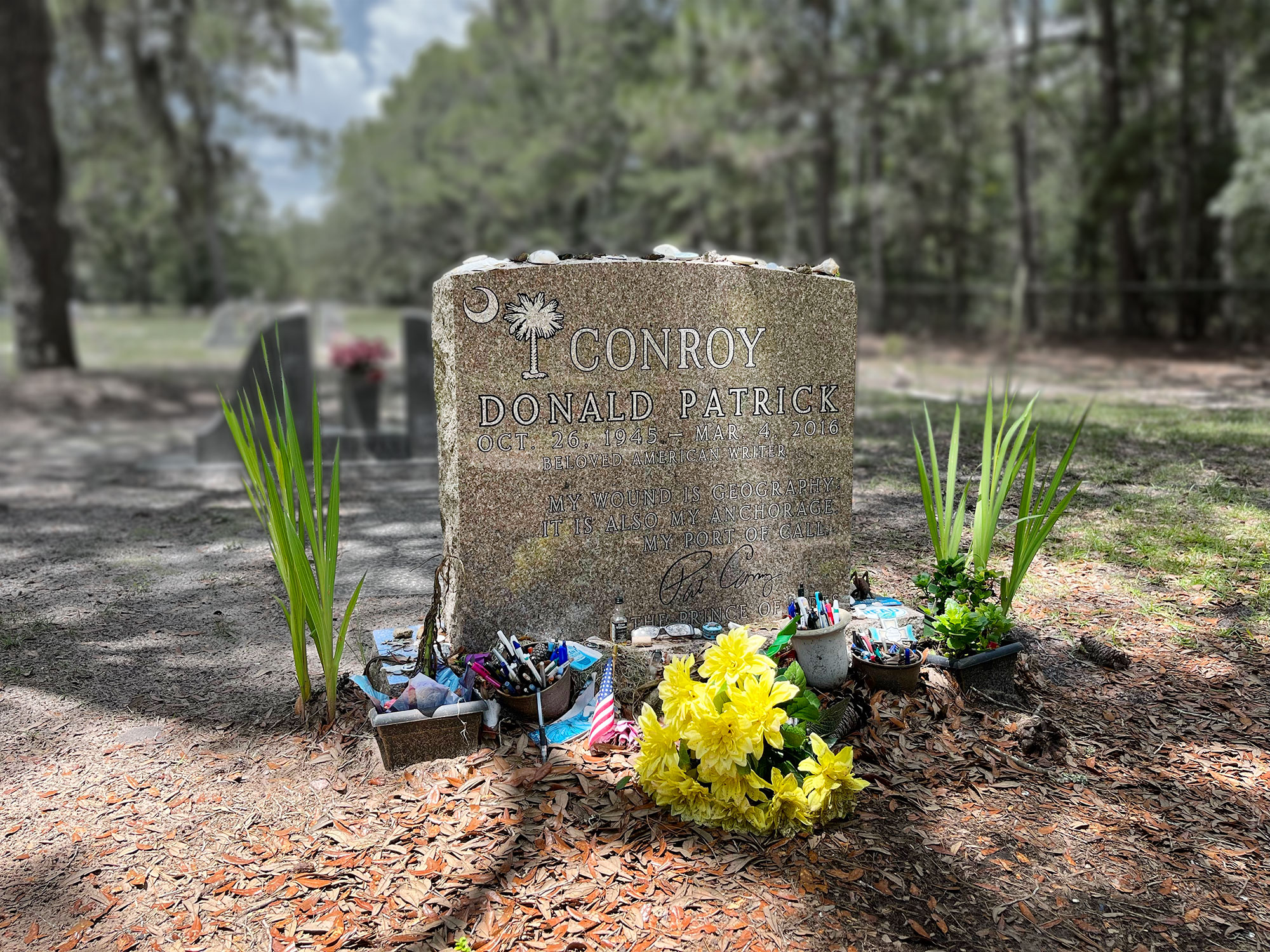 A place to rest

Even some of Pat Conroy’s close friends didn’t know where he wanted to be buried. It was early 2016 and the author, suffering from cancer, had been severely ill for a month.

But after the funeral mass at St. Peter’s Catholic Church in Beaufort, which more than 1,000 people attended, a group of 30 family members and friends gathered at Conroy’s grave at St. Helena Memorial Gardens. At the time, the graveyard on St. Helena Island did not have one White person buried there, until Conroy.

“I was surprised,” said fellow Citadel classmate and author John Warley of Beaufort, “but someone later told me Pat went to a funeral there and said it was a peaceful place, and maybe he could be buried there.”

For years, Conroy would go on pilgrimages to authors’ graves, such as Thomas Wolfe’s resting place in Asheville, North Carolina. The author of The Prince of Tides and The Great Santini would see the pens and other mementos left by people who loved Wolfe.

Death was a theme in Conroy’s many books, sometimes dark, sometimes humorous. In The Great Santini, the character based on his father dies in a military plane crash. In a Conroy cookbook, there is a chapter “Why Dying Down South is More Fun.” Answer: Because folks bring delicious food to the grieving family, of course.

But beyond literary mortality, Conroy’s own resting place was a determined choice.

How Conroy got to this cemetery

He started the process when he was inducted into the Penn Center’s 1862 Circle, which honors people who work on behalf of the Gullah Geechee culture and traditions.

Founded during the Civil War in 1862 to teach formerly enslaved children to read, the center later provided a safe place for Whites and Blacks to hear Dr. Martin Luther King Jr. and space for other civil rights leaders to speak and teach.

Conroy told fellow Penn inductee Roland Gardner of Beaufort he would like to be buried in an African American cemetery.

That was years before he got the cancer that would bring him down.

“Pat didn’t have a racist bone in his body,” said Gardner, who is Black. “He just thought it was the right thing to do.”

Pat Conroy’s cancer came on suddenly in 2016 and it was after his death that Conroy’s widow, writer Cassandra King, contacted Gardner.

“Cassandra asked me to find a place, and I thought the appropriate place was St. Helena Memorial Gardens,” he said.

Interned beside him are some of the most notable African Americans in South Carolina.

There is Leroy Browne Sr. who in 1960 was the first Black person in the state to be elected to an office since Reconstruction, serving on the Beaufort County Board of Directors.

Buried beside him is his wife, Corrine Browne, the administrator and teacher at the Penn Center Nursery School, where she taught hundreds of students.

A long history with Beaufort County

Conroy’s first well-known book, The River is Wide, told the story of his teaching job on Daufuskie Island in 1969. It had an all-Black small schoolhouse. The instruction had been so poor some students didn’t know who was president of the country.

At the end of the year, Conroy was fired. One of the charges against him was for not allowing corporal punishment. Several of his former students went on to be teachers themselves.

This year marks the 50th anniversary of the book’s publication and underlines his choice of his final resting place.

Author Warley now takes visitors to the grave. Haupt sometimes speaks about Conroy’s legacy and lessons in front of the headstone.

The grounds are not easy to find, but many do. Pens, coins, medals, flowers — even small bottles of booze — are left on the headstone or on the ground.

“The thing that touches me the most are the writing awards authors leave there,” Haupt said. “It is something so valuable to them and Pat is still mentoring and encouraging them.”

Perhaps Conroy wanted people who visited his grave to leave with another perspective.

“Pat wanted to bring his readers to this area and to this history,” Warley said.

Penn Center will celebrate its 160th anniversary in November, commemorating the teaching of formerly enslaved people to read. Pat Conroy wanted to be close by.