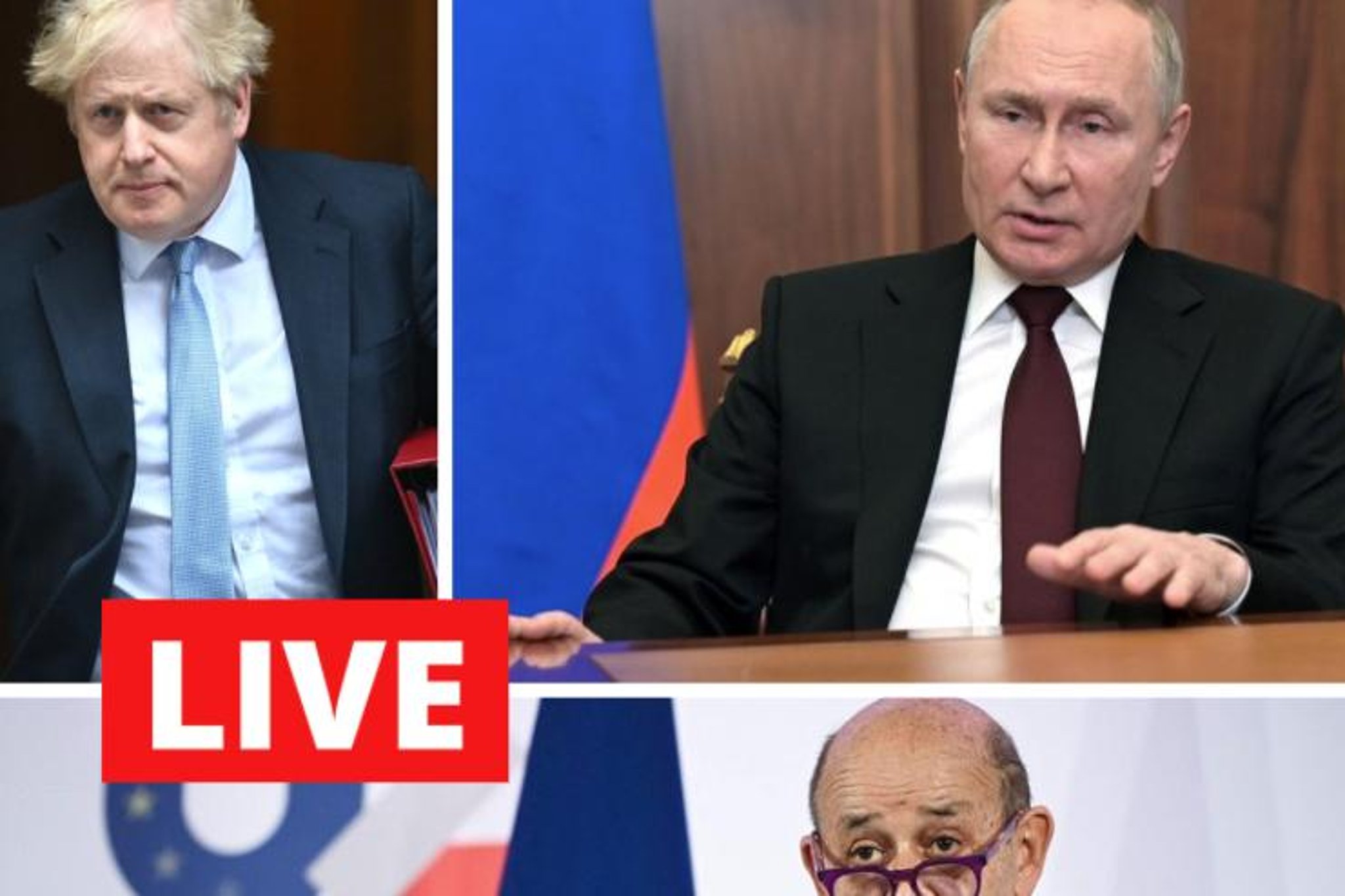 The UK Government has defended the UK’s “very serious package” of sanctions against Russia, arguing it will be effective in “inflicting pain” on Vladimir Putin.

The PM faced criticism from all sides for not going far enough when he announced his clutch of measures on Tuesday.

He had announced that three billionaire allies of the Russian President and five Russian banks would face punitive measures.

In a press conference, the EU’s foreign affairs policy chief Josep Borrell said 351 members of the Russian State Duma who “voted (for) this violation of international law” would be sanctioned.

He said that in addition “27 individuals and entities who are playing a role in undermining or threatening Ukrainian territorial integrity, sovereignty, and independence” would face measures.

The White House says President Biden will no longer be holding a summit with Vladimir Putin, as mooted at the weekend

Russian President Vladimir Putin has ordered troops into two rebel-held regions in eastern Ukraine, after recognising them as independent states.

PM announces military support for Ukraine as he says ‘there’s more to come”.

This will include aid in the form of defensive weapons and non-lethal aid.

Labour said the actions taken by Russia already meant more sanctions should be put in place.

A Labour spokesperson that there was a “core disagreement” with the Government that “further measures need to wait until there is a full-scale incursion”.

He said: “Our view is that the action that has happened so far is sufficient to warrant further and significant action and it seems surprising, to put it mildly, that we’re in a situation where the Government is only meeting with financial institutions this afternoon, where it isn’t in a position to say that it knows whether it can or cannot sanction members of the Duma.

“It would seem logical that this is work that should have been prepared for an eventuality that people knew was coming and I think it’s a further example of the paralysis that we’ve seen in Government in recent months.”

He said the US and the EU had gone further than the UK and that the British sanctions should have “matched the moment, and we don’t believe they’ve done so”.

More British weapons will be sent to Ukraine in response to the looming threat of a full-scale invasion by Russia.

The UK has already sent anti-tank weapons to the Ukrainian military to help counter the threat posed by Russian forces ringed around the country’s borders.

The Prime Minister said: “In light of the increasingly threatening behaviour from Russia, and in line with our previous support, the UK will shortly be providing a further package of military support to Ukraine.

“This will include lethal aid in the form of defensive weapons and non-lethal aid.”

Downing Street would not provide further details on the equipment being provided for “operational security reasons”.

The Foreign Secretary has suggested Tory donors could potentially be hit with sanctions if they have links to Vladimir Putin’s regime.

Liz Truss said she is ruling nothing out “in terms of who we target” over the Ukraine crisis, as she faced calls for her party to hand back donated cash with Russian connections reportedly worth nearly £2 million.

-PM says ‘there is more to come’ on sanction towards Russia

Nicola Sturgeon has said she is “appalled” by Alex Salmond’s continued involvement with Russia Today as the UK Government ordered Ofcom to review the state broadcaster.

Nicola Sturgeon: ‘International community must be “vigilant” against Russian retaliation to sanctions through cyber attacks’

The international community must be “vigilant” against Russian retaliation to sanctions through cyber attacks, Scotland’s First Minister Nicola Sturgeon has said.

“I think that is something that we have to be very vigilant about,” she said.

“The discussions I’ve mentioned already about domestic impacts, cyber security is one of those.

“We know, even before the current situation in Ukraine, that Russia was very active around cyber activity.”

Misinformation and disinformation, the First Minister said should also be guarded against, but she stressed the important point for now was to stand up for the Ukrainian people.

“We have an aggressor in the form of Putin trying to dismember or obliterate an independent, sovereign country and that cannot be allowed to stand,” she said.

The First Minister has backed calls for the Russian-state-backed broadcaster to be banned in the UK.

On Wednesday, Sturgeon met with Yevhen Mankovskyi, acting consul general for Ukraine, and Linda Allison, chair of the Association of Ukrainians in Great Britain.

Asked whether she agrees with calls for RT to be banned in the UK, she told STV: “Yes, I do.

The First Minister said that it is now “even more unthinkable” in light of the situation in Ukraine that Salmond’s involvement with RT should continue.

Ian Blackford: Why is the Prime Minister doing nothing to tackle ‘dirty money’?

SNP Mr Blackford said Russian oligarchs have been welcomed into the UK and the Conservative party and indicated this may be hindering UK support for Ukraine.

“How can our allies trust this Prime Minister to clean up dirty money in the UK?”, said Mr Blackford, “I went to the Prime Minister, the then foreign secretary in 2017, and I raised the issue of limited partnerships, 113 of which have been used to move 20.8 billion dollars out of Russian banks.

“Corruption on an industrial scale. Why did the Prime Minister do nothing back then and why is he still doing nothing now?”

The Prime Minister said he was grateful for the question being raised and Mr Blackford was “right” to raise the issue back then and “right on the issue”, adding: “We do need to stop corrupt Russian money in London and every other financial capital.

“That’s why we have already taken the steps that we have taken but we are going much further to uncloak the true owners of Russia companies and Russian properties in this country. And high time. No country is doing more than the UK to tackle this issue.”

Mr Johnson says money is raised appropriately and pointed out Alex Salmond is a “lead presenter” on Russia today.

The review comes as Starmer said the UK must do more to fight Putin’s campaign of fake news.

Johnson says the culture secretary has already asked Ofcom to review that matter.