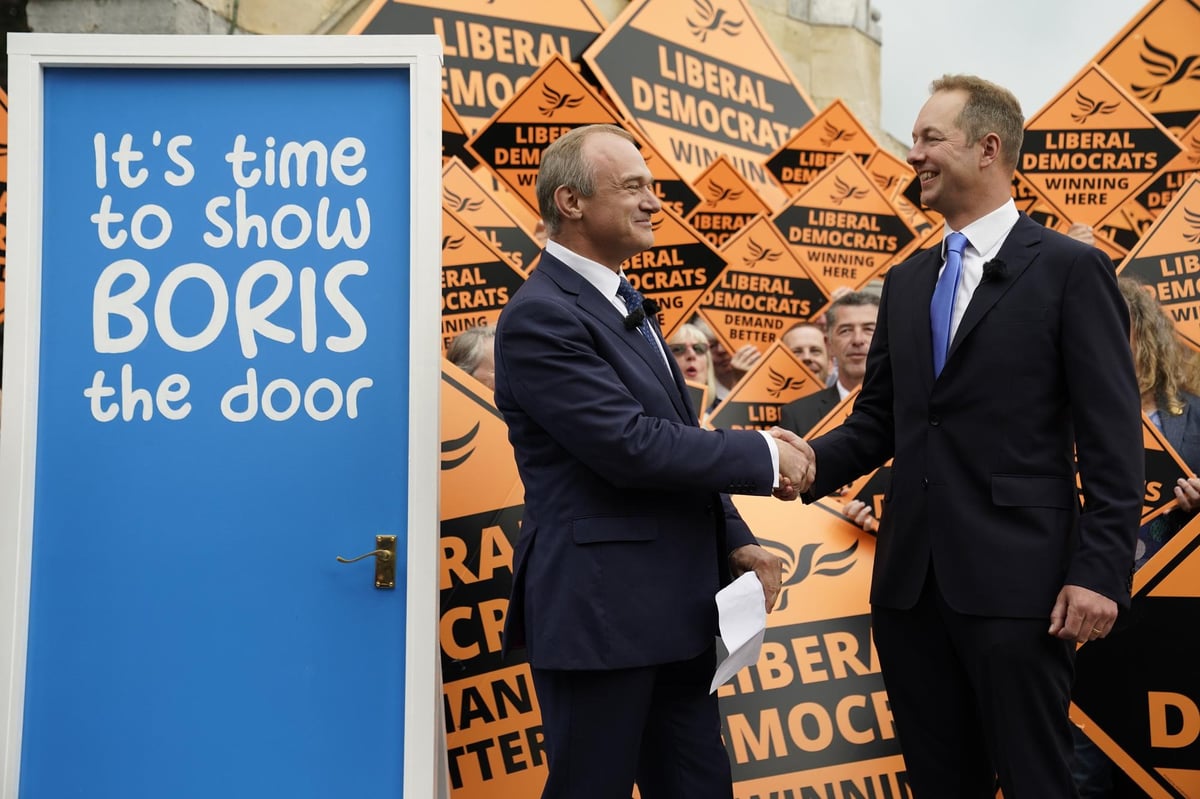 In Tiverton and Honiton the Liberal Democrats overturned a 24,000 Tory majority to win, while in Wakefield, Simon Lightwood was elected with a majority of 4,925 on a swing of 12.7% from the Tories to Labour.

Wakefield was one of the so-called red wall seats won by the Tories in the 2019 general election after being Labour since the 1930s.

Chancellor Rishi Sunak said he was “sad” over the resignation of Oliver Dowden but added he was “determined to continue working to tackle the cost of living”.

Writing on Twitter, he said: “I’m sad that my colleague and friend @OliverDowden took the decision to resign this morning.

“We all take responsibility for the results and I’m determined to continue working to tackle the cost of living, including delivering NICs changes saving 30 million people on average £330.”

He said the PM was choosing to “hang onto the door handle at No 10” but “it can’t go on forever and it certainly won’t go on until the next general election”.

Asked if he saw Oliver Dowden’s resignation as a trigger for more expressions of discontent from the Cabinet, he told BBC Breakfast: “It is possible that that may happen but it is up to my colleagues in the Cabinet to decide whether they can go on supporting a Prime Minister who, frankly, has trashed the reputation of the Conservative Party, my party, for honesty, for decency, for integrity and for compassion.”

Sir Roger said the Tories were “spoilt for choice” for new leaders.

Asked who he would like to see in Mr Johnson’s place, he said: “I’m not playing that game. The media has said over and over again the problem is there isn’t an obvious alternative.

“It’s a monumental, massive, humiliating vote of no confidence in Boris Johnson,” she said.

Scottish Labour leader Anas Sarwar said the people of Wakefield and Tiverton and Honiton “recognise that they deserve better” and challenged his party to set its sights on the next general election and a future Labour government.

Mr Sarwar also told LBC that the SNP’s “last big argument” for independence was Boris Johnson and the Tories.

He added: “I think if we can demonstrate to people that you can express your anger for the Tories, you can get the change you want in our country to bring democracy closer to home, but also bring economic and social powers closer to home and change closer to home without going for independence in a referendum by booting out the Tories in the next general election, that’s a huge shift in mindset in Scotland.”

Speaking to BBC Radio Scotland’s Good Morning Scotland programme, Mr Bowie said he would vote against the Prime Minister again if presented with a choice – but he stressed the country needs to focus on the “big issues”.

He said: “I made my feelings quite clear only two weeks ago in the vote of confidence when I voted that I had no confidence in the current leadership of the Conservative Party.

“I do believe that we shouldn’t be naval gazing and worrying about who is the current leader and we do need to be focusing on the big issues facing the country, such as the cost-of-living situation and supporting the government of Ukraine.

“But no, I don’t think we can carry on as if it’s business as usual.”

Losses in two by-elections have been a “monumental, massive, humiliating vote of no confidence” in the Prime Minister, Nicola Sturgeon has said.

The Conservative Party cannot continue as if it is “business as usual” following two by-election losses, a Scottish Tory MP has said.

The Liberal Democrats overturned a significant Conservative majority to win the Tiverton and Honiton seat in Devon, while Labour retook Wakefield in West Yorkshire.

Andrew Bowie, the MP for West Aberdeenshire and Kincardine, acknowledged his party had a “very difficult night”.

He was one of four Scottish Tory MPs to vote against Prime Minister Boris Johnson in a vote of confidence earlier this month.

Conservative MPs said retaining their seats at the next general election will “no doubt” be difficult following the double by-election loss.

The party lost their former stronghold of Tiverton and Honiton to the Liberal Democrats and surrendered Wakefield to Labour at the by-elections on Thursday night.

Prime Minister Boris Johnson acknowledged that the results are “tough” but vowed to “keep going” – despite the losses dealing another blow to his authority.

Boris Johnson said he would take responsibility, but insisted the cost-of-living crisis was the most important issue for voters and it is “true that, in mid-term, governments post-war lose by-elections”.

“It’s absolutely true we’ve had some tough by-election results. They’ve been, I think, a reflection of a lot of things, but we’ve got to recognise voters are going through a tough time at the moment,” he said at the conference centre in Kigali.

“I think as a Government I’ve got to listen to what people are saying – in particular to the difficulties people are facing over the cost of living, which I think for most people is the number one issue.

“We’ve got to recognise there is more we’ve got to do and we certainly will; we will keep going, addressing the concerns of people until we get through this patch.”

In an interview with Channel 4 News, Mr Johnson added: “I, of course, take responsibility for the electoral performance of the Government.”

Boris Johnson has said he will “keep going” after the Conservatives lost in two by-elections (Photo: Getty Images)