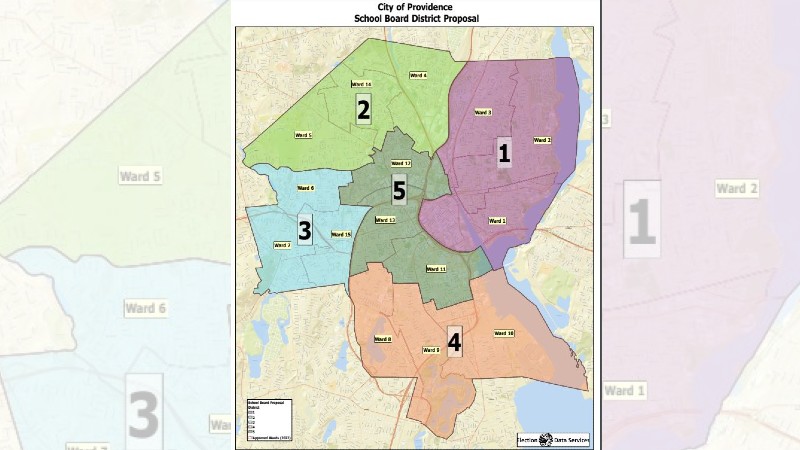 PROVIDENCE, R.I. (WPRI) – The city of Providence is moving closer towards creating an elected school board, a change that would have to be approved by voters in order to become a reality.

A new proposal unveiled by the Providence Charter Review Commission Tuesday would create five regional districts through the city, each of which would have two school board members, for a total of 10.

Each of the five regions would consist of three existing City Council wards, making them roughly equal in population. The City Council utilized the company Election Data Services, which recently drew the new council boundaries, to draw the proposed school board map.

City Council President John Igliozzi, who chairs the charter commission, said the decision to use a regional approach rather than having citywide seats would allow the membership to be spread throughout the city.

“Everybody has a seat at that table, everybody has a voice,” Igliozzi said. “Making sure that groups, organizations, minorities are not excluded.”

The council’s policy director Sean Bouchard, who presented the proposal to the commission, also noted that the city of Worcester’s decision to create at-large school committee seats was recently challenged under the Voting Rights Act because the wealthier area of that city was overrepresented.

School board members would be subject to the same term limits used for the City Council, with three four-year terms allowed, according to a copy of the proposal. The elections would be nonpartisan, meaning the candidates would not declare with a particular party.

In order to create staggered terms, the proposal suggests that the first election for school board would see the top vote-getter in each region get a four-year term, while the second-highest vote-getter would get a two-year term.

The board members would be required to live in Providence and not hold any other office or employment with the city or the school department.

Providence is one of the only municipalities in Rhode Island without an elected school committee. The existing board’s nine members are currently appointed by the mayor, then confirmed by the City Council.

While the Providence School Board lacks its usual powers at the moment due to the state takeover of city schools, the charter change would be in effect beyond when the city gets control of the schools back.

The proposal is not finalized and could be amended before getting sent to the full City Council this summer. It is expected to be among a series of proposed charter changes put forward by the commission.

The City Council will then hold a public hearing before submitting the final recommendations to be on the ballot for November’s election.

Wayne Montague, one of the members of the charter commission, suggested at the meeting that a hybrid model could be used to include both appointed and elected members, ensuring that people with “specific subject matter expertise” could be selected for the board.

Igliozzi said that recommendation will be discussed before a final proposal is forward to the full council.

Other concerns about an elected school board that have been brought up during past discussions include the injection of more politics and influence into education, with several powerful unions representing both employees at the school department and contractors who provide food service and janitorial services.

Igliozzi pointed out that elected school board members would become subject to ethics and campaign finance disclosure laws, and argued the current system is also political.

“What’s more political than when you just have one person appoint nine members?” Igliozzi said.

School Board President Kinzel Thomas said he plans to discuss the proposal with the board’s members.

“I’m open to listening and learning more to what they are proposing,” Thomas said. “The board is not here for any personal gain, we’re here to serve the students and their families.”

The matter of an elected school board is just one of a series of changes to the Providence Home Rule Charter being considered.

The commission is also discussing making changes to the process of removing an appointed official, prompted by the recent efforts by the council to remove former City Clerk Shawn Selleck. (Selleck resigned prior to having a public removal hearing, akin to a trial.)

Other topics of discussion have included requiring the mayor to reappoint directors at the start of each term and to submit the city budget earlier in the year, as well as various changes to city boards.

The commission is no longer discussing creating at-large City Council seats, something Igliozzi had floated early in the process.

“The problem with at-large is unfortunately, the cost of it would be so extreme,” Igliozzi said, referring to campaign fundraising. “Basically you’d have to raise a war chest like you’re running for mayor.”

The commission is expected to forward its final recommendations to the full City Council in July.

Steph Machado (smachado@wpri.com) is a Target 12 investigative reporter covering Providence, politics and more for 12 News. Connect with her on Twitter and on Facebook.