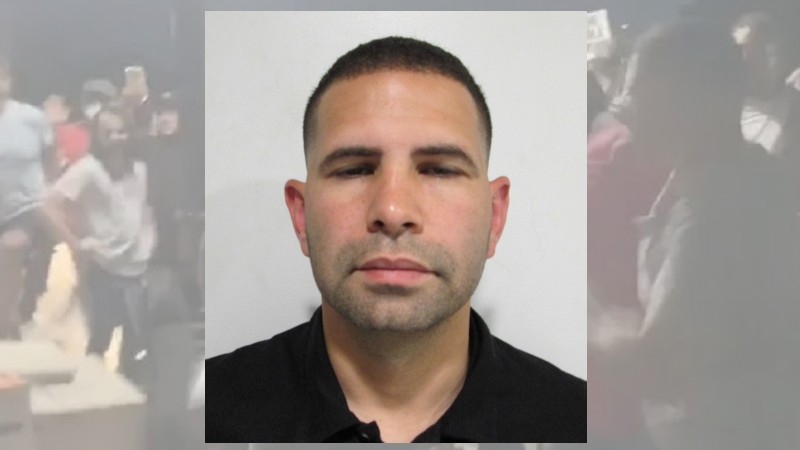 “I have lost confidence in your capacity to and ability to exercise self-control, and to conduct yourself in a civil, respectful and professional manner,” Clements wrote in a notice to Lugo Tuesday.

Clements said as a result, he has recommended that Lugo be terminated from his job.

Lugo, 35, can’t be fired outright because he is protected by the Law Enforcement Officers’ Bill of Rights (LEOBOR).

But with Clements’ recommendation, Lugo now has five days to either resign or request a LEOBOR hearing.

Lugo was arrested over the weekend after video surfaced online of him punching Rhode Island Political Cooperative co-founder Jennifer Rourke during a brawl outside the State House Friday night, where hundreds of people were gathered to condemn the Supreme Court’s decision to overturn Roe v. Wade.

Rourke, one of Lugo’s former Democratic challengers for a state Senate seat in Warwick, told 12 News she was trying to keep the peace after an argument had broken out amongst demonstrators. Lugo claimed he had “stepped in to protect someone that a group of agitators was attacking.”


Providence officer’s attorney: There is ‘far more to what occurred’ at rally

Josh Mello, an independent journalist with Liberty Quahog Media, claims Lugo was trying to stop an unidentified man from attacking him.

“It kind of came out of no where,” he recalled. “I didn’t expect it, he just kind of hit me and that was it … I was stunned.”

Mello said someone called him a “Christian fascist” at one point while he was filming the rally, causing several other agitated demonstrators to surround him.

“I was not a counter protestor,” Mello said. “I definitely didn’t go there as a provocateur.”

Mello said he never expected the rally to turn violent, adding that Rourke was attempting to escort him out of the crowd to safety. He said once the man who hit him is identified, he plans on pressing charges.

“After seeing what that punch has now caused, especially in other people’s lives, he needs to be held accountable,” Mello said.

Lugo initially announced that he would seek the Republican nomination for lieutenant governor this year, but recently decided to end that campaign and instead seek the seat currently held by Senate Majority Leader Mike McCaffrey, D-Warwick. (Rourke had been challenging McCaffrey in the Democratic primary until he announced his retirement on Monday.)

But on Saturday afternoon, a message posted to Lugo’s Twitter account stated he would no longer be seeking political office this year. The account was then deactivated.

Lugo was released on personal recognizance and will be formally arraigned on July 8.