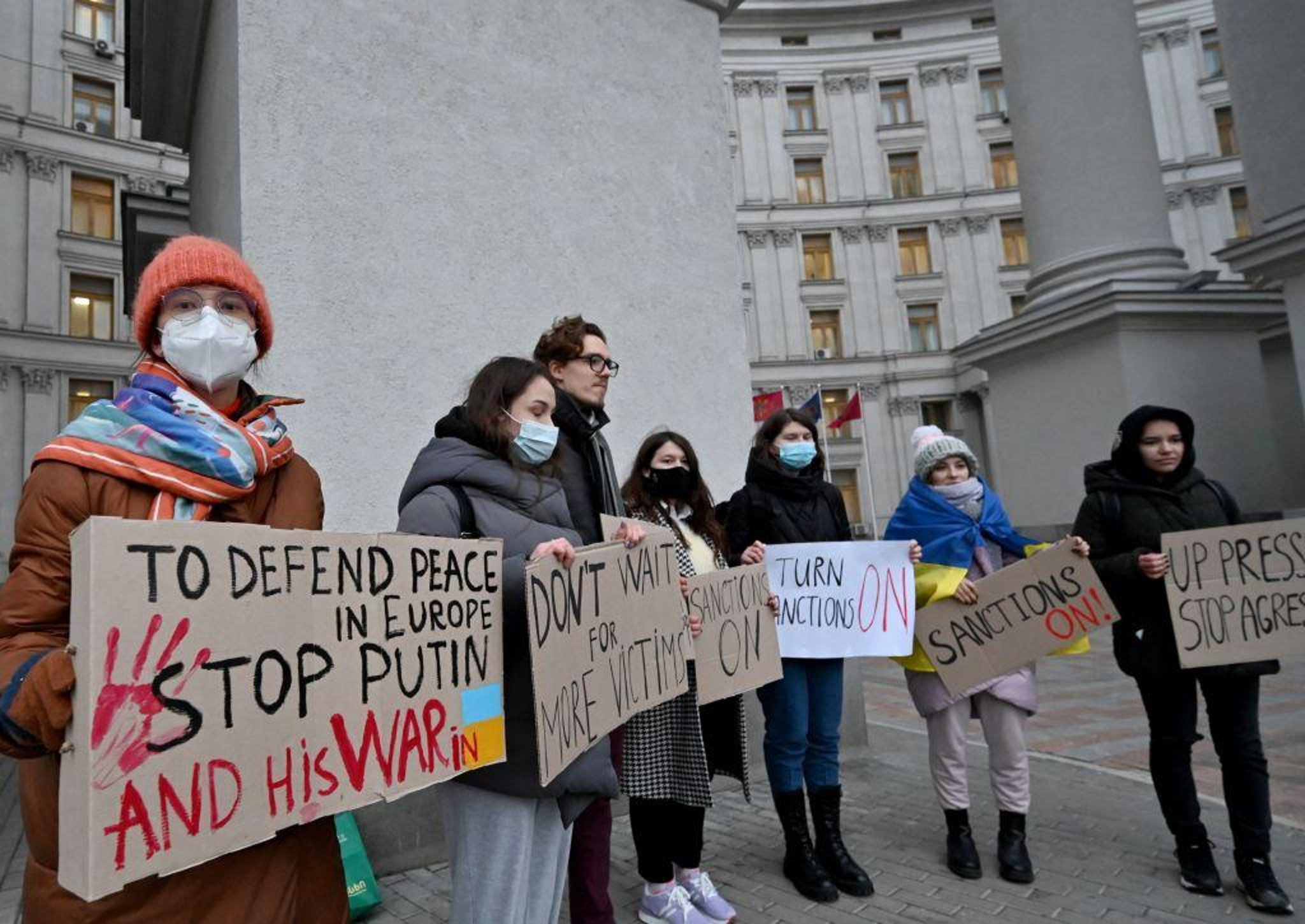 Mr Putin said he plans to grant a request from the leaders of Donetsk and Luhansk – two regions in eastern Europe held by Russian-backed separatists – to be recognised as independent following an emergency meeting with his security council, which could trigger European Union sanctions if followed through.

The move could also justify Mr Putin transferring more troops into the area and would see the Kremlin officially give up on the 2015 peace deals that recognise Ukraine’s sovereignty over the territories.

Speaking in Westminster on Monday, defence secretary Ben Wallace urged Russia to “re-commit to a diplomatic process” for “the sake of his own people” as he warned “we are on the cusp of the invasion of a democratic country in Europe”.

Protesters hold placards during a rally outside of the Ukrainian Ministry of Foreign Affair in Kyiv at the weekend.

In an address to the Russian nation, Mr Putin said that Ukraine had been created by Vladimir Lenin.

“If Ukraine was to join NATO it would serve as a direct threat to the security of Russia,” he added.

He said that Russia was “robbed” when the Soviet Union disintegrated in 1991 and claimed that the events of 2014, when the pro-Russian government was overturned in Ukraine, as a “coup”.

The conflict has escalated in the past few days, with the US and UK warning of an imminent Russian invasion.

Unconfirmed reports late on Monday afternoon claimed Ukrainian officials said a civilian was killed in frontline shelling on the eastern Ukraine border. Pro-Russian separatist authorities said at least four civilians were killed by Ukrainian shelling over the past 24 hours and several others were wounded.

Meanwhile, the Kremlin dashed hopes of a potential summit between US president Joe Biden and Mr Putin brokered by French president Emmanuel Macron.

Speaking during a Covid press conference on Monday night, Prime Minister Boris Johnson said that recognition of the breakaway states would be “plainly in breach of international law”.

“It’s a flagrant violation of the sovereignty and integrity of Ukraine,” he said. “It is a repudiation of the Minsk process and the Minsk agreements and I think it’s a very ill omen and a very dark sign.”

In Westminster on Monday, Mr Wallace said he had seen “the Russian playbook being implemented in a way that gives us strong cause for concern that President Putin is still committed to an invasion”.

“That should worry us all,” he said.

Mr Wallace said the UK Government needed to be in a position to threaten sanctions, but should not do so without co-ordinated support from the US and European Union. The EU on Monday finalised its package of sanctions for use if Russia orders an invasion – including plans to implement them if Russia moves in to any part of Ukraine.

“If there is annexation, there will be sanctions, and if there is recognition, I will put the sanctions on the table and the ministers will decide,” the EU’s foreign policy chief Josep Borrell said.

It is not clear yet at what point the UK’s sanctions will be implemented.

Mr Putin said he had told the leaders of France and Germany, who have been acting as mediators with the West, of his plans for the

The defence secretary said: “I think that there are plenty of measures we can take, we are planning some serious sanctions. And I think that the reality of that question to President Putin is ‘do you actually care what’s going to happen to your people, because it’ll be them that suffer most?’”

Mr Wallace said the Government had learned lessons from a lack of action in 2014, when Russia invaded and subsequently annexed the Crimean peninsula from Ukraine.

He said: “We have to stand up to this because we didn’t stand up in 2014 as an international community. The Prime Minister has been very clear that one inch over the border on this will lead to the sanctions: one boot, one tank, one vehicle. We won’t accept it as anything other than an invasion.”

Read more: How the West is trying to stay one step ahead in Putin’s playbook

He said countries such as Yemen, which gets 20 per cent of its grain from Ukraine, would also be affected by the conflict.

He said: “I think the new leader of Alba might like to reflect on his celebrity status on some of those channels.”

Mr Wallace said the UK Government had a responsibility to ensure that Ukrainians – as well as the rest of the world – had access to free press and accurate information to debunk fake news.

He added: “We could ask the leader of Alba on his next Russia Today programmes to do an in-depth analysis of exactly some of these false claims and broadcast it. I’m sure he’s open to the highest bidder.”

French leader Mr Macron said on Sunday he had brokered a meeting between Mr Biden and Mr Putin. However, the Kremlin dismissed the suggestion as “premature” in a move that sent international financial markets, which had risen on the news, back down.

Mr Macron’s office said both leaders had “accepted the principle of such a summit”, to be followed by a broader meeting that would include other “relevant stakeholders to discuss security and strategic stability in Europe”.

US secretary of state Antony Blinken and Russian foreign minister Sergei Lavrov are set to lay the groundwork for the potential summit when they meet on Thursday.

The meeting comes after the US administration sent a letter to the United Nations human rights chief claiming Moscow has compiled a list of Ukrainians to be killed or sent to detention camps after the invasion. The list is believed to include members of the LGBTQ+ community and religious minorities, as well as journalists and people opposed to Russian actions.

Since Thursday, shelling has spiked along the tense line of contact that separates Ukrainian forces and Russian-backed rebels in Ukraine’s eastern industrial heartland of Donbas. More than 14,000 people have been killed since conflict erupted there in 2014, shortly after Moscow annexed Ukraine’s Crimean Peninsula.

Ukraine and the separatist rebels have traded blame for massive ceasefire violations, with hundreds of explosions recorded daily. Images have emerged of damage to schools and Kindergartens in the region.

Mr Putin said he would decide on the regions’ request for recognition as independent territories by the end of the day, with the decision coming after televised appeals by separatist leaders, who pleaded with Mr Putin to sign friendship treaties envisaging military aid to protect them from what they described as the ongoing Ukrainian military offensive.

Russia and its ally Belarus announced on Sunday they were extending massive war games on Belarus’s territory, which many believe could offer a staging ground for an attack on the Ukrainian capital Kyiv, located less than 50 miles south of the border.