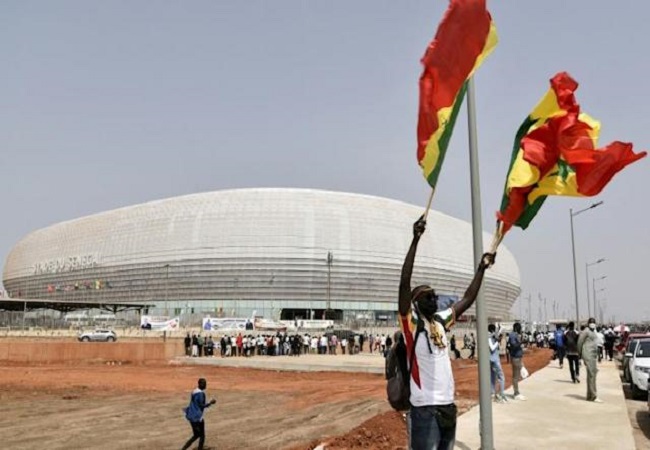 Senegal Built a world-class stadium in Diamniadio, a town about 30 kilometres from the capital Dakar. The new sports facilities inaugurated on Tuesday, 22 February will bear the name of former president Abdoulaye Wade.

This new venue will be the only one in Senegal certified for international football after the country’s last major stadium in the region of Thies about 70 kilometers from Dakar lost its certification from the Confederation of African Football (CAF) in May 2021.

Current President Macky Sall said during an inauguration ceremony that the naming of the stadium was a “tribute to the multidimensional, intellectual, pan-Africanist politician“.

“This beautiful infrastructure dedicated to young people is an invitation to continue our path towards excellence.” Sall said.

Following Senegal’s dramatic victory at the Africa Cup of Nations (AFCON) on February 6, thousands of jubilant Senegalese gathered on Tuesday for the inauguration of the 50,000-seater stadium aimed at making the country Africa’s go-to venue for international events.

Also Read : A STADIUM IN MEMORY OF SADIO MANE FOR LEADING SENEGAL TO AFCON SUCCESS

The new stadium was built in just 18 months by Turkey’s Summa construction company, at a cost of 156 billion CFA francs ($270 million, 238 million euros).

Am exhibition match will be part of the show, with Senegalese legends such as Aliou Cisse — the current coach of the national side — opposing a team of African all-stars, including Cameroon’s Samuel Eto’o and Didier Drogba of Ivory Coast.

Also Read : CISSE DOESN’T TALK TOO MUCH BUT IS EFFECTIVE—SENEGAL PRESIDENT

“It’s a source of pride to have a stadium as beautiful as this Senegal. The country needed it to restore its footballing image.” Said one fan, Bamba Dieng, 24.

“I’ve never seen such a great stadium. I hope it will be properly maintained so that it lasts for a very long time.” Said Ibou Ngom, 29.

Mbaye Jacques Diop, a communications advisory at the ministry of sports, said the project was part of a programme to make Dakar a “sporting hub” for Africa.

“It would mean an end to matches transferred to Asia because the continent lacked infrastructure.” He said.

The first big competitive match will be on March 29. Senegal, who beat Egypt to take the African title, meet the Pharaohs again in a  World Cup qualifier.

Senegal has launched a programme to refurbish its stadiums before Dakar hosts of the Summer Youth Olympics in 2026.

The country’s biggest sporting venue is the 60,000-capacity Leopold Sedar Senghor Stadium built in Dakar in 1985.