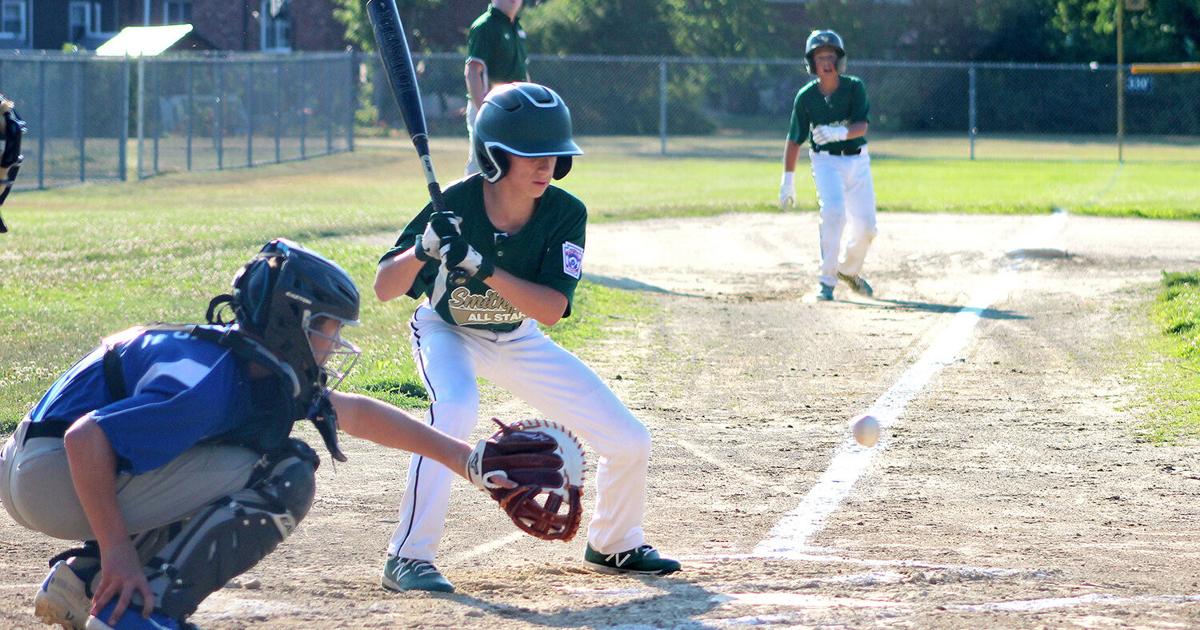 CUMBERLAND – After being shut out and mercy-ruled on its home field by Cumberland in the opening game of its best-of-three championship series, the Smithfield Little League’s Junior Division all-star baseball team came back in a big way to even their District IV series on Monday night by posting a 10-4 victory at Bentley Field.

Both teams were scheduled to play a winner-take-all game on Wednesday night back in Cumberland, and Smithfield co-manager Mike Guilfoyle was very pleased with the way his players battled back with their “never-give-up approach” to even the series.

“Following last week’s loss, as they have done in the past, the Smithfield players dug deep and played the type of baseball for which they are renowned,” he said. “For the past seven years, the players who comprise this team have always risen to the challenges before them, and they did so again in tonight’s elimination game.”

Smithfield jumped on Cumberland for a run in the top of the first inning and never looked back. The winners only collected six hits, but took advantage of 12 walks off five Cumberland pitchers.

Jacob Shunney picked up the win on the mound for Smithfield, as he worked four innings, gave up three runs on three hits and four walks, and struck out five batters. Noah Antunes went 2 2/3 innings, and Tyler Guilfoyle recorded the final out with a lineout to shortstop.

Shunney, who was also Smithfield’s leadoff batter, reached base in all five of his plate appearances with a single, three walks, and an error, and he scored four times, including in the first, when he crossed the plate on a single by John Rinaldi.

In the second, Smithfield’s first six batters reached base, five on walks, and after Elliot Suggs got hit by a pitch to load the bases, Joey Guthrie, Shunney, and Nathan Cameron drew walks to force in runs.

Rinaldi then drove in Smithfield’s fifth run with a single to center, and Guilfoyle grounded out to short, allowing Cameron to score and give his team a 6-0 lead.

“We knew that there was a great deal of talent on this team,” the Smithfield manager said. “Tonight, that talent came alive on the field. Whether it be on the mound, defensively, or at the plate, they just played a phenomenal game. They played the baseball that we knew they were capable of playing.”

Cumberland got on the board in the bottom of the second. Matt Fontaine reached first on a grounder that went past the third baseman, and after he stole second and went to third on a passed ball, Ben Vadenais walked. Fontaine then scored on a wild pitch, and Vadenais later came home on a groundout to short.

Smithfield added two more runs in the third to extend its lead to 8-2, with a run scoring on a base hit to center by Shunney. Cumberland scored its other runs in the fourth and fifth innings, and Smithfield’s final two runs came in the seventh.

“The depth of talent on this team is impressive, and tonight, the manifestation of that talent was on full display against a great Cumberland team,” added the Smithfield manager.

While Smithfield and Cumberland were playing for the championship on Wednesday night, the Major Division ages 9-11 all-star teams from the two towns were also vying for the District IV title at Whipple Field. Smithfield entered the game with a 6-0 record that saw the all-stars outscore their opponents, 81-5.