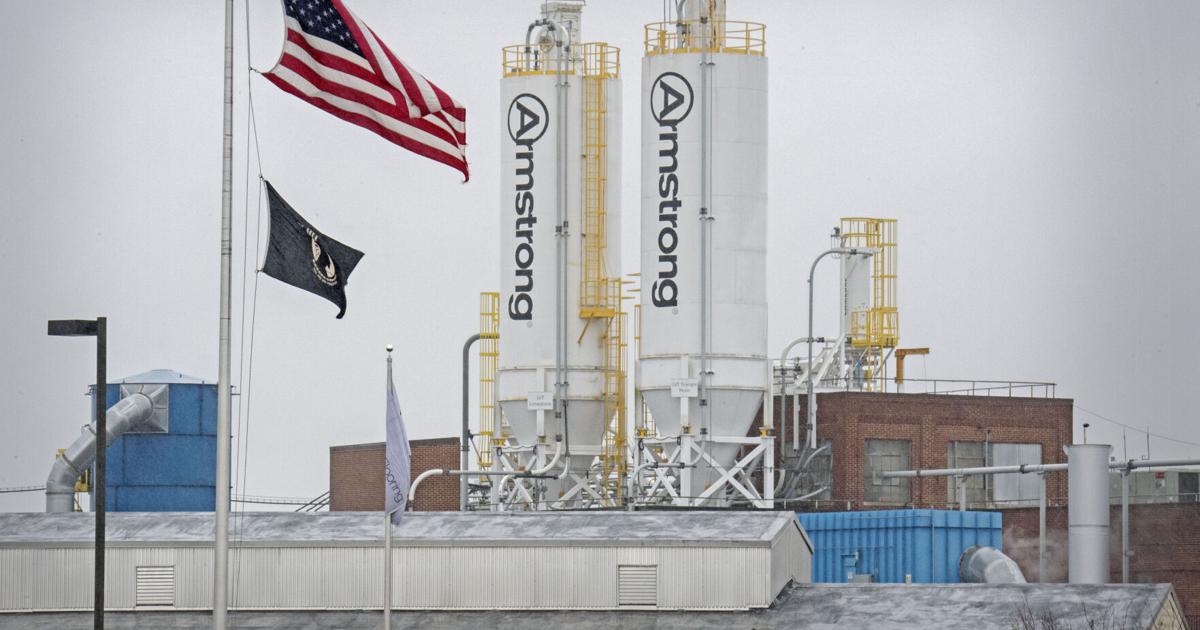 The unions representing 289 Armstrong Flooring Inc. workers in Lancaster County and Jackson, Mississippi, want to make sure to maintain some bargaining power as the company moves through a bankruptcy sale.

The unions filed an objection to the sale of the East Lampeter Township-based international flooring maker Thursday.

The unions and creditors are seeking to preserve their rights to question the sale and to negotiate better financial outcomes. The objections will be discussed at a sale hearing currently set for Wednesday.

The unions, United Steelworkers and International Association of Machinists and Aerospace Workers, said in their objection that they recognize that potential buyers may not be willing to assume all liabilities in relation to collective bargaining agreements. The unions said the objection is “a protective, preliminary, and conditional objection.”

The chemical company said it was concerned that Armstrong Flooring would be rendered “administratively insolvent” and there would be no money to pay administrative expenses. The company said it was concerned about nearly $1 million owed, part of which it maintained should have a priority to be paid. It also said a contract that Armstrong Flooring said could be assumed by new owners was incorrect.

It’s not clear who, if anyone, has bid on the company. Qualified buyers remain a mystery to all but a few attorneys and key executives. The bidding process, which was approved by a judge, aims to maximize the sale price and ultimately the money that Armstrong Flooring will get to pay its debts.The secrecy around bids prior to auction protects potential buyers who may be competitors and not want to reveal information contained in its bid proposal.

“The company does have flexibility under its bid procedures to adjust and continue to negotiate in consultation with the relevant parties,” the company’s communications team responded to an LNP | LancasterOnline inquiry about the bids. “These matters, like the bidders and the bids themselves, are confidential and we will provide updates at the appropriate milestones in the process.”

Armstrong Flooring has been up for sale since at least October when it engaged investment bank Houlihan Lokey Capital Inc. to act as its financial advisor.

How many bids and who ultimately made a play for the company and for how much won’t likely be disclosed publicly before an auction that may occur on Monday when a special bidder could be announced. If there are not at least two qualified bidders there won’t be an auction.

The special bidder, called a stalking horse bidder, sets the low bid for an auction and the terms of the purchase agreement. There will only be an auction if there is more than one bidder for the same asset.

Any creditor who provides at least three business days’ advance notice to the debtors may attend the auction virtually but not participate. You must email the notice with your contact information to Armstrong Flooring’s attorneys at DLAPOLLOSP@skadden.com.

Armstrong Flooring is faced with dwindling finances as it navigates Chapter 11 bankruptcy, which it filed May 8. Armstrong Flooring’s lenders have set July 7 to pay back a $24 million loan given to keep the company running through bankruptcy.

The company owes an estimated $318 million, including $160 million in long-term debt, and sought protection from lenders through bankruptcy. It received court approval to sell off its assets it values at $517 million.

The company notified 606 Lancaster County workers – as well as workers across the country – that they could face permanent layoff if there was no bidder to keep the company going. The company has acknowledged in court documents that there could ultimately be no bidders.

Here’s what we know so far:

What is up for bid?

Bids can be for specific assets, the North American assets, China and Australia assets or the whole company. The bids can be to just acquire the asset or to operate the company, known as a going-concern bid.

The assets also include trademarks and intellectual property.

Also potentially part of the sale are assumption of contracts and leases, including contracts with suppliers and unions. Armstrong Flooring, at the urging of the unions, has required any bidder that planned to continue operating to outline the impact of its bid on workers and jobs.

The company has said it wants to cease contracts with United Steelworkers and International Association of Machinists and Aerospace Workers when a sale is consummated or when Armstrong Flooring stops operating a plant, or its financing ends, whichever comes first.

The contract cancellation must be approved by a judge.

Who is bidding or interested in bidding has not been revealed publicly. The court has even sealed some documents that refer to potential bidders. Armstrong Flooring has set up a secure digital forum for qualified bidders to take a closer look at operational and financial documents.

Armstrong Flooring said previously most potential bidders were looking to liquidate the company. More recently, president and CEO Michel Vermette wrote to some employees that there was “positive momentum” for a going-concern bid.

“We have received a number of proposals to acquire all of various parts of our business as a going concern,” Vermette wrote. “These potential ‘going concern buyers’ want to acquire – and operate – substantially all of our U.S. and non-U.S. business and assets. While we cannot share the value of the proposals or the names of the potential buyers, we want to share our enthusiasm for this positive momentum.”

The bid deadline was extended from June 14 to accommodate potential going-concern bidders.

In court filings, Armstrong Flooring has chronicled its struggle to find a buyer, which began last year. By March, Armstrong had five indications of interest and two nonbinding letters of intent, each expressing interest in acquiring certain assets of the company. The expressions of interest never panned out.

A bidder for a larger portion of the business abruptly terminated negotiations on April 21. Armstrong and its advisors shifted to others that had expressed interest.

In May, a court filing from its lenders claimed that the only expression of interest for certain assets is a nonbinding letter of intent from a well-known liquidator.

What happens after the sale is approved by the bankruptcy court?

Creditors will haggle over what they will receive from the proceeds of the sale. Bank of America N.A. and Boston-based Pathlight Capital are first in line, followed by unsecured creditors. The court has set a bar date of Aug. 5. That is the date to file a claim for money owed by Armstrong Flooring.

Success! An email has been sent with a link to confirm list signup.