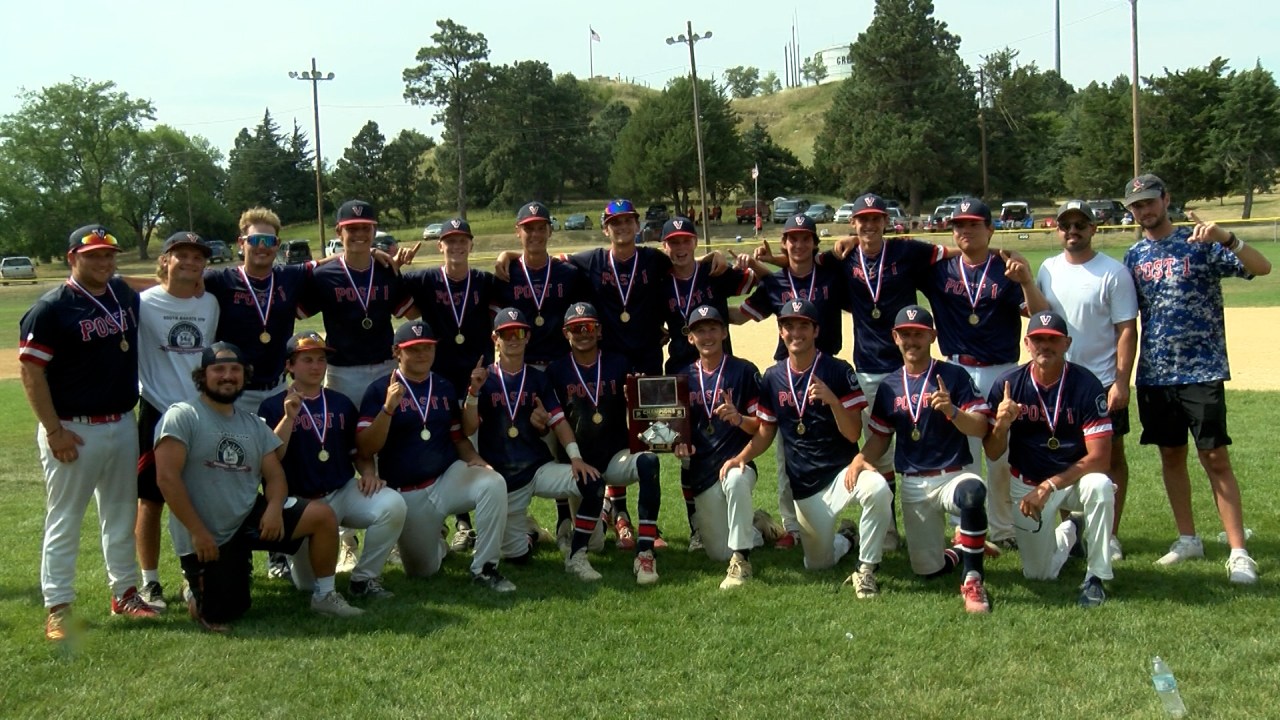 GREGORY, S.D. (KELO) — Vermillion lost to Winner/Colome is the second round of the Class ‘B’ legion baseball state tournament, sending them to the losers bracket.

Vermillion won three straight elimination games in the state tournament, to keep their season alive and reach the class ‘B’ state championship.

“State tournament time is crazy, but we’ve bounced back. Every time we’ve lost this year, it’s sparked us and it really sparked us this time. We were able to go out and win every other game after that,” Tournament MVP Jake Jensen said.

“It was a tough tournament and then battling the heat today too. Playing two games, I’m proud of our kids, they never gave up,” head coach Tom Heisinger said. “It felt like we had that game won or lost at least two or three times. They just hung in there.”

Post 1 needed a pair of wins on Tuesday to claim the crown. Following a win over Gregory, Vermillion would meet Winner/Colome for the championship.

The game started as a pitcher’s duel, but a sixth inning grand slam would give Post 1 a five run lead.

“I still can’t believe that, Reece Proefrock, that’s not really his game, with hitting homeruns. He’s such a quiet kid and he puts the work in,” Heisinger said. “He’ll tell you that he struggled a little bit this year, but he stuck with it and came up big for us. What a huge momentum maker that was and what a special moment for him.”

Winner/Colome would score five in the sixth to tie the game and in the seventh, the heat became a major factor.

Both Vermillion catcher, TJ Tracy and the home plate umpire got overheated, as the temperature rose to 111 degrees.

“He started cramping a little bit, a lot of bit. He’s probably still cramping somewhere back there. He started cramping, so we started helping him out and then the umpire started getting queasy he said,” Jensen said. “He went and changed and rested for a bit and we had a 30 minute break. I was just getting us fired up the whole time. I knew we were winning. I knew there was no shot we were losing that game.”

Post 1 came out of the break ready to go, as an eighth inning walk would score the go ahead run and just three outs later, Vermillion would claim the 2022 class ‘B’ state championship.

“I’m really excited for those guys. Like I’ve said, they’ve been through three or four state tournaments with us and they came up short a couple times,” Heisinger said. “For these eleven guys to go out on top with a state championship, it’s really special, really special. I’m happy for them.”

Vermillion won 12 of their final 13 games this season, to finish the year with a 23-10 record.